The Skinny On Coconuts

The Pharaoh’s Nut, also called the coconut, is known as the “Tree of Life” because it is one of the most useful trees in the world.  In addition to its food value, there are innumerable uses for the tree and its fruit including soap, cosmetics, rope, lumber, fuel, fertilizer, charcoal filters, and a host of domestic products that can be woven from the leaves.

Many people are unaware that the first recorded coconut sighting was from Costas, an Egyptian traveler in the 5th century, A.D when he wrote about finding an “Indian nut” that many scholars today claim was the coconut.

Coconuts were also referred to in the story of Sinbad the Sailor in 1,001 Arabian Nights. Coconuts made a strong impression on Venetian explorer Marco Polo, 1254 to 1324 CE, when he encountered them in Sumatra, India, and the Nicobar Islands, calling them “Pharaoh’s nut.” The reference to the Egyptian ruler indicated Polo was aware that during the 6th century Arab merchants brought coconuts back to Egypt from East Africa where the nuts were flourishing.

In the 1700s, the Portuguese finally gave the coconut the name we use today. In Portuguese ‘coco’ means ‘grinning face’ or ‘monkey face’ – (derived from the Portuguese for monkey – ‘macaco’) resembled by the three dark circles on the shell.

For about 3960 years of the of the past 4000 year the documented historical use of the coconut as both a food and a pharmaceutical was well respected around the world in the tropical regions of South and Central America, Africa, the Indian subcontinent, Micro-, Mele- and Poly-nesia and most of Asia. The uses are so respected that they were documented by Ayurvedic medicine in Sanskrit from 1500BC in all areas relating to the mind, body and spirit.

However, this all changed in 1954 when the coconut was dubbed a villain by the medical establishment and the fat-phobic popular media. A media campaign demonized the coconut and other tropical oils and blamed them for heart attacks because of their saturated fat content; the health establishment and the American Heart Association quickly jumped on board. All the saturated fats were simply generalized under one category, ignoring the fact that some saturated fat is in fact necessary for human health. As a result, food companies stopped using tropical oils, replacing them largely with partially hydrogenated oils.

This was a bad move, of course, since those oils contain trans fats, which were subsequently found to be more of a health hazard than any saturated fat.

The Prudent Diet, as it was called, left a legacy, which still haunts us today. 40 years on, this conceptual change in the eating habits of Americans has negatively influenced and changed the dietary regimes of societies all around the world that were initially not even affected by America’s particular meat, potato and milk diet.

The American industries were so determined in converting their claims into magnificent billboards of health and wealth that even small island nations in the South Pacific were converted by this powerful marketing machine to change centuries of dietary traditions of tropical oils to importing polyunsaturated fats.

Now, fortunately, the coconut is making a comeback.

Modern research has shown that not all saturated fats are alike and coconut oil is unique in its structural make-up due to its medium chain fatty acids – the closest to those found in human breast milk that nature provides. 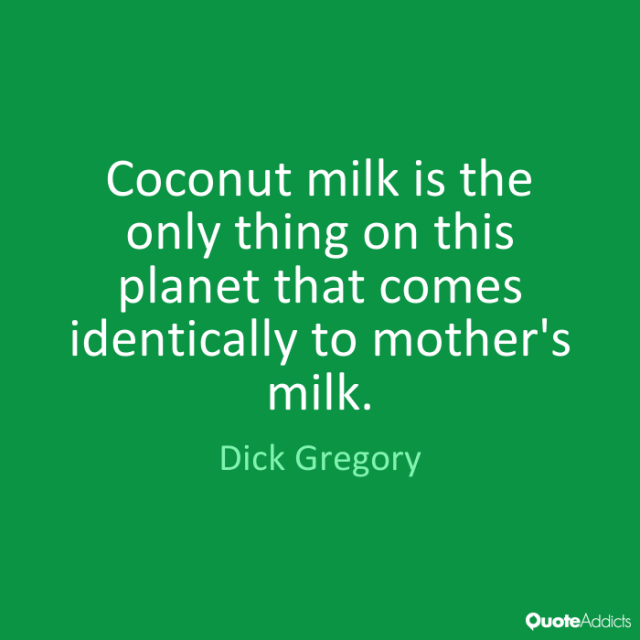 This is because they are processed directly in the liver and immediately converted into energy. There is therefore less strain on the liver, pancreas and digestive system and, being easily digested, they also tend to improve the absorption of other nutrients.

Past research has failed to reveal this because it was carried out on hydrogenated coconut oil – a process that transforms all fats into man-made, dangerous, carcinogenic trans fatty acids.

Our health shouldn’t have to depend on the swinging pendulums of nutritional bureaucracy. Nature has provided perfectly packaged foods in the form of whole, natural plant foods. There is a rhyme and reason for every one of these in terms of its macro and micro-nutrient compositions, health, and medicinal properties. When we take these foods and process them in some way, we are moving away from this packaged perfection. The more we process foods and isolate nutrients, the more controversial, problematic, and unpredictable the food becomes.

So how do we choose the BEST Coconut Oil?

First, make sure it is 100% Pure! Pure virgin coconut oil is made from fresh coconuts, NOT copra (used for many coconut oils) and the resulting product should have a distinct taste and fragrance. Oils made from copra have to be refined bleached and deodorized to make them fit for human consumption and they have no fragrance or flavor. Some manufacturers take advantage of the FDA rule that allows for up to 20% cheaper, filler oils to be added to coconut oil. Not cool and not healthy.

Proper harvesting of the coconut (the age of a coconut can be 2 to 20 months when picked) makes a significant difference in the efficacy of the oil making process in addition to how the oil is pressed (cold) makes the best final extracted product.

To pick a high quality product, focus on coconut oil that is virgin, organic, processed in the least invasive way, and packaged in glass jars. Food and plastic do not mix for optimal health. Every few months or years, we learn about some new toxicity issues related to plastic and its potential to leach various harmful compounds into the food or drinks being stored in it.

Focus also on reputable companies who provide fair trade products and accurate, detailed information about their coconut oil. If they can leave the world a little better than they found it – why not help them out?

Coconuts that are prepared, typically right where they grow, by local families for manual pressing tend to ensure the freshest coconut oil and provides the least invasive processing methods possible. It is also the most eco-friendly and supportive of native people’s livelihoods.

Curious about the coconut?

See, Smell and Taste the difference for yourself. Give it a try!

Hi. My name is Julia El-Haj. I am a Hall of Fame Athlete, an MBA, Professional Certified Marketer, Certified Youth Fitness Trainer, a Specialist in Sports Nutrition and a licensed Real Estate agent. I gave up my "seat at the table" to be home with my 3 children because that's where I was needed most. I blog about everything with Wellness in mind.
View all posts by julia29 →
This entry was posted in Beauty, Health and Fitness and tagged best coconut oil, best coconut oil for body, coconut body oil, egypt, oil pulling coconut oil, organic coconut oil, ph of coconut oil. Bookmark the permalink.