Every Man Is The Builder Of A Temple Called His Body

In Scripture we are told that God made man in his own image. This is stated not only in the Christian Bible but also in the holy writing of nearly all enlightened people. The Jewish patriarchs taught that the human body was the microcosm, or little cosmos.

There is no doubt that the Old Testament is a physiological and anatomical textbook to those capable of reading it from a scientific viewpoint. The functions of the human body, the attributes of the human mind, and the qualities of the human soul, have been personified by the wise men of the ancient world. Today a great drama has been built around their relationships to themselves and to each other. 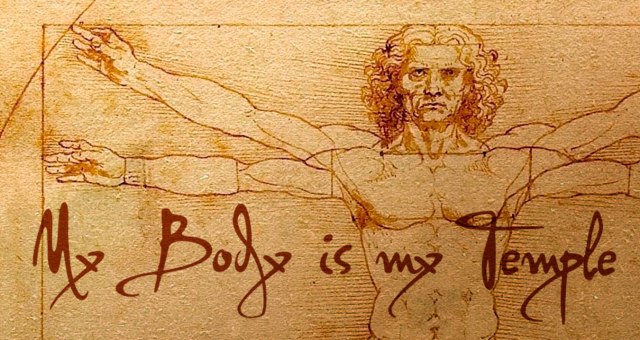 The religions of the ancient world were all based upon nature-worship, which in a degenerated form has survived to our own day as phallicism.

The building of temples in the form of the human body is a custom common to ALL people. The great Egyptian Temple of Karnak, The Tabernacle of the Jews, the religious structures of the Hawaiian priests, and the Christian churches laid out in the form of the cross, are examples of this practice.

If the human body were laid out with the arms spread in the shape of any of these buildings, you would find that the high alter would occupy the same relative position in the building that the brain occupies in the human body.

We know that the human body has been the inspiration for nearly all mechanical contrivances. Hinges are copied from the human body; likewise the ball and socket joint. We are told that the first plumbing was reproduced from the arterial and venous circulatory systems.

Hundreds of machines and implements have been inspired by the subtle workings of our own vehicles, for the human body is the most marvelously constructed machine that the human mind can study. We know that mathematics and geometry are the great keys to universal order, and they are nowhere more evident than in the physical body.

While on the subject of the debt of science to the human body we might add that the decimal system is the result of primitive man’s counting on his fingers, whereby ten became the unit of enumeration. The ancient cubit also was the distance between the elbow and the end of the second finger, or approximately 18 inches. So it goes back through the study of things until we find that nearly everything with which man has surrounded himself is an adaptation from the body with which God surrounded his spirit.

The word Adam, meaning species or type, signifies humanity collectively; that is, the wave of cosmic life that is now flowing through nature in the form of human beings.

The ancients therefore, gave us the concept that the body is a living temple of the living God. Each human body is a sanctuary for a spiritual entity or reality. This body, this temple, has been in various ways corrupted.

We have gradually lost the strength, the vitality, or the incentives to maintain properly this living temple. Most people do not even bother to consider the body a temple. Our attitude toward our own physical structure is almost unbelievable. In the first place, to most individuals the body is merely a servant of the purposes of the will, the mind, and the emotions. The body is merely a kind of animal, which is supposed to draw wagons as horses did, a faithful servant to the pressures that are forced against it.

The body in a sense is analagous to humanity. It gives us an understanding of the relationship of parts to the whole. Within the body of man there are more separate living entities than there are creatures upon the surface of the earth. Not only is this true of human beings, but of every form of life that exists.

Within the human body, however, is a far greater assembly of life than can be found anywhere else. Some of these are so small that we cannot see them. Because they sometimes are born and die within a few hours, and because they are so completely involved in the structures, which they nourish and sustain, we lose sight of the fact that we are not one being alone, but that the human body is a field of evolution for millions and billions of living things.

All of this together and very, very much more, brings me to the final realization that this body is indeed a sacred thing that it has been given to us for a reason, for a purpose.

Hi. My name is Julia El-Haj. I am a Hall of Fame Athlete, an MBA, Professional Certified Marketer, Certified Youth Fitness Trainer, a Specialist in Sports Nutrition and a licensed Real Estate agent. I gave up my "seat at the table" to be home with my 3 children because that's where I was needed most. I blog about everything with Wellness in mind.
View all posts by julia29 →
This entry was posted in Culture, Health and Fitness, Philosophy, Religion, Science, Spirituality and tagged body is a temple, egypt, health, Hermetic, human body, humanity. Bookmark the permalink.