I wouldn’t be on my pop-culture duty if I ignored the news of Kim Kardashian being preggers by Kanye West. In case you’ve just emerged from an Internet dead-zone, on December 30, West announced Kardashian was preggers at his Atlantic City concert. Kardashian’s boyfriend/”misteress” told the crowd to “make noise for my baby mama.” 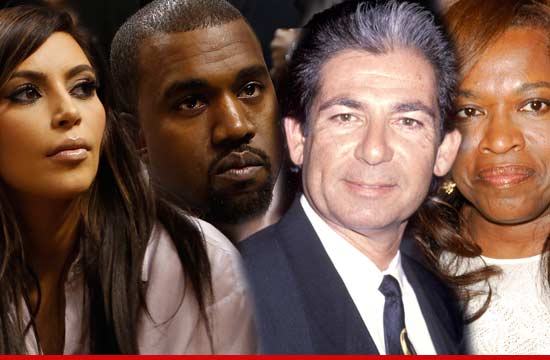 This is one of those subjects I want to continue to ignore — mostly because it just seems wrong to say anything but “Congratulations!” That said, l feel compelled to weigh in since news of the KimYe spawn hijacked Twitter for 2-3 hours on Sunday night. Unsurprisingly, Twitter went all-the-way-in dragging Kim for her life. It. Got. Ugly. I won’t go that far. Pinky swear.

But,I do want you to know I really try to write about double standards, like how Kim Kardashian is called “a whore” for dating a bunch of guys. And yet, Carlos Walker — sorry, I’m not calling a grown man “Shawty Lo” — can impregnate 10 women and somehow escape that label. It’s a worthy point, but it wasn’t what I really wanted to say. This is:

1. This relationship was a bad idea from the start

Recall the chatter of the Keeping Up with the Kardashians episode where Kanye threw out nearly all of Kim’s clothes? No “good for you” dude wants you to re-haul your entire image to be with him. To make it worse, Kim dressed and looked better before Ye came around.

2. What in the hell was Kim thinking?

Her marriage to Kris Humphries was likely a hoax/ratings ploy. Somehow, I don’t think the ongoing divorce battle was part of the plan.

It’s just plain sloppy to enter another relationship when the previous one isn’t done. (And even sloppier to bring a kid into that situation.) I know ratings and attention are everything in reality TV world, but the line has to be drawn somewhere, especially on issues that actually affect other (little) people.

3. Uh … What in hell was Yeezy thinking?

I don’t ask that because of Kim’s dating or sexual history. She was unmarried from around 20-30. Dating is what she was supposed to be doing since she wanted to be married again.

Kanye’s always come off as the uncomfy-in-his-skin suburban kid who wanted to be down with the streets. The conflict is responsible for some of his best music. But from what we see of his personal life, he often seems like he’s trying to prove something, and he usually goes way too far — like publicly dissing his exes and “defending Beyonce’s honor” by running up on Taylor Swift. His most rebellious actions have come across like sucker moves. This one does too.

4. The double-standards for non-Black, famous women are appalling

Fantasia became pregnant by a married man, and she was eaten alive for it. I know Kim is not going to get Fantasia’s scourge-of-humanity treatment because she isn’t Black. Kim’s prettiness, non-Blackness, and her extraordinary fame are not only going to minimize the fall out, but this classic Maury behavior is going to boost her brand. Expect this KimYe baby news to make the cover of every tabloid for weeks to come. Oh, and a Kardashian maternity line coming soon.

Old folks got a saying, “how you finish is how you start.” I believe them (see Point 1). For the sake of the forthcoming KimYe child, I hope this relationship works out – either as a marriage or an amicable co-parenting situation — but I just don’t see it. I do look forward to the album though, even if the content will likely be better suited for a therapist than the public masses.

6. I wish their kid the best

I mean that sincerely. Some people reproduce and I think, “they’ll be fine!” as parents. Others? You really worry about that kid. Kanye’s a self-proclaimed “international asshole.” And well, Kim? Well, she’s Kim and motivated by fame. Let’s hope the responsibility of parenthood changes these two for the better. And if not? Thankfully, the KimYe spawn one will have the best nannies, and if necessary, therapy, that money can buy.

Oh, and Aunt Khloe, who is by far the sanest Kardashian.

Hi. My name is Julia El-Haj. I am a Hall of Fame Athlete, an MBA, Professional Certified Marketer, Certified Youth Fitness Trainer, a Specialist in Sports Nutrition and a licensed Real Estate agent. I gave up my "seat at the table" to be home with my 3 children because that's where I was needed most. I blog about everything with Wellness in mind.
View all posts by julia29 →
This entry was posted in Uncategorized and tagged Atlantic City New Jersey, E! News, Ellen, Kanye West, Kardashian, Keeping Up with The Kardashians, Khloe Kardashian, Khloe Kardashian Odom, Kim, Kim Kardashian, Kris Humphries, Pop Culture, Reality television, Robert Kardashian, The View, TMZ, twitter. Bookmark the permalink.

3 Responses to Would Kim’s Dad and Kanye’s Mom Approve?