Let’s Ask Again: Why Don’t You Love Me?

Step into my office. And just for a second, let’s leave our ultra-feminist/womanist egos at the door. The imagined barriers that separate us from our “other” sisters. The “I graduated from college–she didn’t” wall. You understand. This isn’t another postmodern feminist read. This is rather best received as an unsolicited response. Guns down ladies. I come in peace. 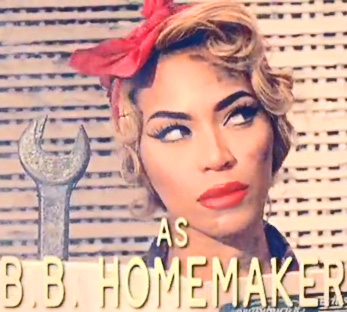 Why does Beyonce get under our skin?

Face it, the woman has it all. Or at least all we were sold on having. She has the dream career and the dream marriage (would you have ever thought we’d describe the “Girls, Girls, Girls” Jay Z as such?). But we no longer gag at these classic “I have arrived” formulations. We’re more interested in substance. Why do we presume, if we do, this is the very thing Beyonce lacks?

The singer’s early interviews revealed she wasn’t the smartest chick off the Houston block. She fumbled over words, appeared uneasy, and at times her eyes roamed to the ceiling. Beyonce quickly earned Black music’s airhead title and we’ve given her little room to out grow it. Beyonce’s ’60 Minutes’ interview however shuts down those staining coming of age moments. Albums later, the strings were seemingly unfastened. A 28-year-old confident and mature Beyonce emerged. In charge of her brand, the superstar declared she puts herself first.

She’s far from the loud mouthed industry prima donna– she saves her “Diva” antics for the stage brilliantly marketing an alter ego Sasha Fierce. The gusty temptress allows space for a more private Beyonce she leaves only to a curious public imagination. We actively wonder what of Beyonce, the woman and Beyonce, the wife.

On Jay: “Make him think he’s in control”

Beyonce gives the Southern Belle makeup able to compliment a larger than life hip hop king’s ego. She stands in demure posture; the 16 Grammy Award winner is a quiet storm who quietly upgrades. Imagine the couple vacationing on a private island (as they probably are right now). In the company other wealthy lads Shawn Carter boasts on a yacht about his latest capitalist venture and his “on to the next one” spend. The men blow out hearty laughs and cigar smokes. Somewhere in a noiseless corner Beyonce sits near a pool smiling on the inside giving only the gracious *sigh*. Nearly 10 years later she epitomizes Destiny’s Child’s chart topping “Independent Women Part 1″ single — she tops the Forbes list and yes she makes more dough than her man. Lest we forget with a pretty crafty prenup in tact.

She simultaneously offers her latest alter ego creation B. B. Homemaker. A stylish 50′s housewife where dusting in 4-inch designer heels is a fashionable inconvenience. Beyonce belts out lyrics Betty Draper could only imagine. A nostalgic symbol of Americana juxtaposed by sassy temper–to many of our counterparts this is a shock factor. But for Black women in America, it’s in our matrilineal blood–audaciousness is what we do.

Beyonce the branded brainless girl is no distinction. The artist has clearly taken cues from her mother. Tina Knowles quietly dismissed herself from a cheating husband, managing to skip Wade-like controversy. Beyonce’s squeaky clean image is perhaps more than due to a PR strong hold, could it be her rearing? Beyonce’s success rivals if not out performs her counterparts. Yet we’ve seen little of a wild party girl. No DUI. No criminal court appearances and no panty-less car exiting. She seems to have mastered old school ‘good girl’ rules — the kind that will make him ‘put a ring on it’ while concocting an unparalleled career arguably unseen in recent memory. Beyonce sells sex and ‘House of Dereon’ sheets. What’s outwardly unusual about it all is that she anchors and sails her own ship.

What’s wrong with being sexy?

Decades after the women’s/feminist movement, some how we still conceptualize the feminist or more liberally, the socially conscious woman as a makeup-less, bra-burning, hair wrap wearing butch. A disregarded or misinterpreted sexual revolution unrealized, today a woman in towering Brian Atwoods and a cute mini is still not taken seriously. Beyonce’s stage costumes and sidewalk paparazzi shows are visual appetizers to men and an eye-rolling, nose-turned up presentation to some Black women. No doubt some looks and moves are suggestive and we aren’t co-signing ‘Single Ladies’ children. But why can’t a near 30-year-old woman be sexy? Much of her off-stage looks are often casual and understated ensembles, excluding her signature fire-hydrant red lips.

Notice she never runs in packs. That is outside of her own entourage. Beyonce isn’t spotted conveniently lunching at a California camera hotspot with the coveted Hollywood BFF crew. Her friends much like her image is protected. Entertainment’s female rat packs often appear to be constructed to solicit some kind of media attention. Twitpics of peace sign and kiss throwing images shows industry camaraderie gone fake. Ever since Beyonce tied the knot with Jay Z, she’s rarely seen with anyone else. This is met with relative contention and understandably so. But when you’re on top of the world its presumably hard to have genuine friendships, even with a cousin. Damn.

Beyonce strikes a strange discord with Black women. We’ve undoubtedly witnessed a decade of Beyonce-over load–making her the woman we love to hate and perhaps the woman we’d like to miss. What really stops the singer from receiving the kind of nobel Alicia Keys praise? Even amid the Swizz Beatz-MaShonda controversy, Alicia Keys escapes the fight nearly blameless. But no punches were spared with Beyonce. We deconstruct her every flaw–such is the life of an international celebrity.

But can we stand to consider the things we can learn from her? Is there some concealed part of our collective selves that admires her? Perhaps her pleading vocals in “Why Don’t You Love Me” speaks not only to an ungrateful man but also to her estranged sisters, “Why don’t you love me? Tell me (sister) why don’t you love me?”

Hi. My name is Julia El-Haj. I am a Hall of Fame Athlete, an MBA, Professional Certified Marketer, Certified Youth Fitness Trainer, a Specialist in Sports Nutrition and a licensed Real Estate agent. I gave up my "seat at the table" to be home with my 3 children because that's where I was needed most. I blog about everything with Wellness in mind.
View all posts by julia29 →
This entry was posted in Uncategorized and tagged Alicia Keys, beyonce, BIllboard, Destiny's Child, Grammy Award, Hip Hop, I Am... Sasha Fierce, Jay, Jay Z, Music, Single Ladies, Single Ladies (Put a Ring on It), Super Bowl, Tina Knowles, Why Don't You Love Me. Bookmark the permalink.

2 Responses to Let’s Ask Again: Why Don’t You Love Me?