What The Frack? For Oil And Gas Companies, Some Laws Don’t Apply

“Fracking,” the shorthand for “fracturing” is heard a lot in the news these days. It’s an oil-drilling technique that’s becoming increasingly effective for recovering lots of oil and gas from rock formations—and is undergoing widening application in the United States. 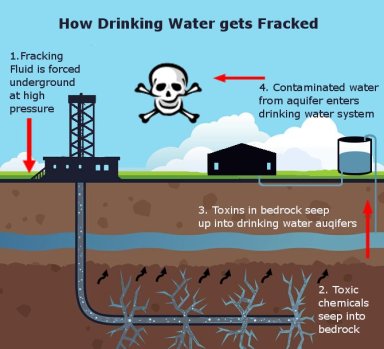 In fact, a recent public report by the National Intelligence Council says that modern fracking for oil in the United States is a “technological revolution, which won’t be completely understood for some time.” And that “in a tectonic shift, energy independence is not unrealistic for the US in as short a period as 10-20 years.”

The country is in the midst of an unprecedented gas drilling rush—brought on by a controversial technology called hydraulic fracturing or “fracking.” Along with this fracking-fueled gas rush have come troubling reports of poisoned drinking water, polluted air, mysterious animal deaths, industrial disasters and explosions. We call them “Fraccidents.”

So how does Fracking work?

Chemicals and massive amounts of water are injected into the ground to cause fractures in the rock, which then allow increased access through a borehole to the gas reserves.

Contamination is not the only issue: the massive quantities of water consumed by fracking also raise concerns, especially in the west, where water scarcity is already a fast-growing problem. With between 3 and 9 million gallons of water pumped per well and the water table already dropping, the battle over water supplies is not likely to be without a controversy of its own.

On top of it all, the water is pumped at intensely high pressure, and minor explosives are used (they are breaking through layers of rock, after all), which means the earth’s very foundations are, by design, weakened. Some suggest that fracking can cause earthquakes, pointing to Colorado and Texas in particular. Then, as a result of earthquakes comes additional contamination—tiny earthquakes in Denver, for example, disturbed the city’s aquifer, because who can predict ahead of time where the chemicals will end up. As a result, the aquifer has never been used and the city has turned instead to the western slope for water.

Oil and gas production can release toxic substances into the environment. Such toxics include benzene, phenanthrene, lead, arsenic, barium, antimony, fluoride, and uranium. Some of these toxics come from the oil and gas itself. Other toxics come from the chemicals oil and gas companies inject into the ground during the drilling process. Health threats can emanate from wellpads, pipelines, compressor stations, or waste disposal sites.

Recently released reports concerning fracking operations should again give lawmakers pause before they agree to open up more land for these potentially devastating operations.

On September 20, Environment America released a report titled The Costs of Fracking, which details the dollars and cents costs imposed by dirty fracking operations. The report notes that when considering the value of fracking, policymakers and residents must consider that the operations’ costs include:

On September 24, Earthworks released an alarming report titled Breaking all the Rules, which finds that states are failing to enforce oil and gas safety regulations. Specifically, the report finds that:

Thousands of oil and gas wells (53-91%) are operating without any kind of inspection to determine if they meet state environmental and safety regulations. For instance, in 2010 Pennsylvania inspectors failed to monitor 82,000 wells (91% of the state’s active wells).

When inspections do occur and do reveal violations, the violations are often not formally recorded. In fact, the decision whether or not to record a violation is often left to the discretion of the individual inspector.

When violations are recorded, they often result either in no penalty, or in very weak penalties that do not deter the company from future violation. For instance, in 2010, Ohio, New York, and New Mexico each collected less than $200,000 for all fines from oil and gas violations.

While many of us might have hoped there could be a real possibility for the demise of OPEC price control, it’s also possible that it might not be allowed to happen—for reasons of corporate greed—together with a basic failure of our strategic energy policy. Why? OPEC not only sets the world price of oil, but the price it sets also directly affects—and thereby indirectly sets—the prices of alternative fuels, and also the oil produced from fracking.

In other words, if you were a “fracker” would you prefer to sell your oil at 1) the high OPEC-set price, or 2) a price that was derived—and thereby lowered—by the wide-scale effects of your own production.

So, it’s not surprising that most everyone in the “oil business”, whether alternative fuels or not, wants high prices to continue forever—the higher the better—no matter how they are determined and no matter who does it. And, because price fixing is mostly illegal here, the huge, multinational oil companies gladly defer to the simple greed reflected in OPEC world oil price setting.

In 2011 the United States passed Russia as the world’s largest producer of natural gas, said Mark Finley, BP’s general manager for global energy markets. But because the U.S. lacks sufficient facilities to liquefy and ship natural gas, most of that gas enters the domestic market.

As a result, in 2011 the United States had the largest increase in oil production of any nation outside of OPEC. And the OPEC nations increased production largely in response to the disruption of Libya’s oil industry, and only after the U.S. and the International Energy Agency threatened to release strategic reserves.

The problem is that the industry is exempt from some of the most fundamental legal safeguards for public resources. The list is almost hard to believe:

To extract gas through fracking, a well is drilled several thousand feet into the ground and then cut horizontally beneath the shale. Water is then injected into the well at extremely high pressure to break up the shale deposits and release pockets of stored natural gas. This water is mixed with sand and chemicals. Up to 4 million pounds of sand is used per well, and the chemicals include toxic, radioactive, and carcinogenic substances. After the well is fracked, approximately 10 to 40 percent of the chemical water (fracking fluid) returns to the surface and must be disposed of.

Sand dust created by fracking, is now one of the country’s greatest threats to the health and safety of workers, according to a report issued by the National Institute for Occupational Safety and Health (NIOSH).

This astounding threat to human health joins the list of other serious hazards linked to fracking such as water contamination, earthquakes and air pollution.  The link between exposure to silica dust, silicosis, and lung cancer is one of the oldest and most well-known occupational hazards.

The NIOSH landmark study found that fracking workers are exposed to silica, particles found in sand dust, at sometimes more than 10 times the recommended limit. These particles can easily be inhaled and then lodge in the lungs and cause potentially fatal silicosis.

As scientists, communities and governments around the world debate just how harmful fracking is to the environment and public health, the practice continues to expand.

Americans should not have to trade their safe drinking water for natural gas. We can and must get safeguards on the books to protect against the impacts of fracking-gone-wrong that we are watching unfold across the country.

Hi. My name is Julia El-Haj. I am a Hall of Fame Athlete, an MBA, Professional Certified Marketer, Certified Youth Fitness Trainer, a Specialist in Sports Nutrition and a licensed Real Estate agent. I gave up my "seat at the table" to be home with my 3 children because that's where I was needed most. I blog about everything with Wellness in mind.
View all posts by julia29 →
This entry was posted in Uncategorized and tagged Clean Air Act, Energy Policy Act, Environment America, Fracking, Hydraulic fracturing, International Energy Agency, Mark Finley, Matt Damon Movie, National Intelligence Council, NIOSH landmark study, Oil well, OPEC, The Promised Land, United States. Bookmark the permalink.