When I think of bread my mind goes back to cold Saturday mornings with ice on the inside of the patio doors and cartoons blazing on the television. My dad would get up early and go to the store and return with two fresh loaves of French Bread to have with breakfast.  Bread was always plentiful in our household.  And, I didn’t start thinking about this until I baked my own the other day. 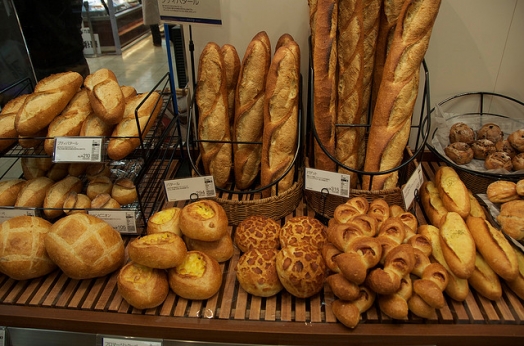 Bread, in Egyptian Arabic, is called aish, which literally means life, rather than khobz, which is the word that other Arab-speakers use.

The Egyptian word, applied to bread, gives this everyday element an almost mystical quality.  Egyptians are considered to be the agricultural pioneers of the  world, and are attributed with popularizing the art of making bread.

It was the Egyptians who are credited with using a “starter” of wild yeast from the air that was kept and mixed with other dough and baked to create a leavened product.

Legend has it that a slave in a royal Egyptian household forgot about some dough he had set aside. When he returned, it had doubled in size. Trying to hide the mistake, the dough was punched down furiously and baked. The result was a lighter bread than anyone had ever tasted.

Bread is life, the food of the body and soul.

Strangely the bread itself which is broken into lots of little pieces actually brings everybody who eats a morsel of it together into the same company partaking of the one original loaf which is symbolic of God of course, who is the Bread of Life.

The process of bread making is ingenious and magical in that it combines very simple ingredients: flour and water (sometimes we add yeast, seasoning, or oil). The ingenuity of bread is evident in a process that is so simple yet contains complex scientific properties.

The milling, or grinding, of ourselves is metanoia which is ‘usually rendered by “repentance,” is literally “change of mind,” or intellectual metamorphosis … a transformation of one’s whole being: from human thinking to divine understanding’

Bread is eaten all over the world by almost every culture. Its prime ingredient is flour, from the medieval flower meaning the “best part of the ground grain,” and it shares much of the same symbolism of nourishment, vitality and blessing. Even today the concept of “breaking bread together” is a lasting symbol of the uniting power of a meal.  It is a continuous gift as provided from the feminine principle of the Divine.

If we traveled to the other side of the planet we would probably find a culture very different from our own, yet with its own version of bread. The diversity of this staple food is endless and every culture prides itself in having its own unique kind of bread. If we went on an international culinary bread tour, we could eat baguettes from France, Focaccia from Italy, soda bread in Ireland, Naan and Roti from India, dark rye bread in Russia, tortillas in Mexico, Pandesal in the Philippines, bannock from North America, or mantou in China.

The language of the country or region has a lot to do with our philosophy about bread and many other subjects.  In American English, the words “bread” and “dough” are slang for money.  A “bread winner” is a person who earns money to keep their family going and a “bread basket” often refers to a geographical region that has a principle grain supply.  Have you ever thought about our expression, “the greatest thing since sliced bread?

Breaking bread means making love … mutual. When someone breaks bread and gives it to another he is sharing with him what is his own. But you’ve got to see it happening both ways … you the giver, you the sharer, but also you the receiver, you the gainer.

Almost any variety of grain can be turned into bread, which makes it one of the most diverse foods in the human diet. Breads are formed into endless varieties, shapes, and sizes; with many different flavors and textures. The grains that we use in our bread products today have been grown on earth for thousands of years with some varieties having been adapted over time to successfully produce in various kinds of soil conditions.

Bread products are considered a staple because they usually form the basis of a traditional diet and provide us with most of the calories and carbohydrates that we need to maintain good health.

Modern baked goods, in stark contrast to ancient whole grain breads, begin with highly refined white flour. While it is still called “bread” but it has no real resemblance to bread that could be genuinely referred to as food. Today’s white flour makers start with wheat seed, no legumes, and remove the fibrous outer shell called the bran. They either throw it away or sell it to health food stores.

Before eliminating bread from your diet, consider the many types of bread that are available and decide if there is one that suits your needs.  Bread has been around for ages. While trends such as low carbohydrate nutrition or low fat dieting come and go, bread is here to stay.

Homemade bread is all the rage these days. Any why not? Few foods are as satisfying to make and eat. Let this be the year you finally get into the habit of baking bread from scratch. You will be so happy you did.

There’s something really empowering about being intimately connected to our most basic needs, and being able to create the things that nurture yourself and your family is very precious

Hi. My name is Julia El-Haj. I am a Hall of Fame Athlete, an MBA, Professional Certified Marketer, Certified Youth Fitness Trainer, a Specialist in Sports Nutrition and a licensed Real Estate agent. I gave up my "seat at the table" to be home with my 3 children because that's where I was needed most. I blog about everything with Wellness in mind.
View all posts by julia29 →
This entry was posted in Uncategorized and tagged ancient egypt, Baking, Bread, children, Cooking, Flour, happiness, health, Home, Homemade Bread, Ireland, learn, life, love, Mexico, motherhood, nature, Pandesal, philosophy, The Simple Dollar, United States. Bookmark the permalink.

3 Responses to One Common Thread: Bread